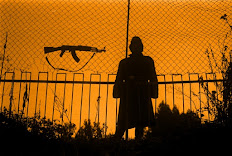 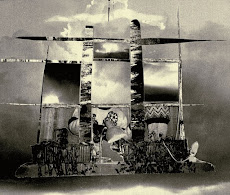 For actor, photographer and painter Artur Gorishti, it is no coincidence that this black and white photograph is dominated by a human story that has its foundations in both fact and fiction. The two are combined in the imaginary and unstable atmosphere of a shocking environment. The narrative lies in the inevitable and continuous interconnection between the beginning and the end of situations, states of being and objects themselves. What we see is the emotional situation of a family: the older figure becomes tired, burns out and collapses, while the younger one hopes, fantasizes and grows. The central panel depicts a room and two members of a family: the composition draws its tension from the actions of falling down and raising up. It is framed on either side by mirror images of a wrecked cement structure that stands in for the social environment. Its destruction cancels out light, life and clarity, and it has a powerful effect on the family scene, contrasting starkly with the sense of continuity conveyed by the girl’s penetrating gaze. The contrast between black and white suggests a break in the continuity of time and space during a certain period in history.

Artur Gorishti is one of those artists not satisfied to work in only one medium. Since graduating in theatre from the Academy of Fine Arts in Tirana, Gorishti has enjoyed an extremely successful career as a film actor. He has also been active as a photographer and painter. Why film as well as photography and painting? Words, images and colour are the key elements of Gorishti's artistic language. In the photograph Sentry, we see a silhouette (reminiscent of Chinese shadow theatre) of a man and a gun against a background of wire mesh and fences. The figure of the man is that of a sentry whose uniform dates to the communist period. The gun is a Kalashnikov. The title of the work is Sentry, but the relationship between the man and the weapon makes the photograph politically inaccurate. Although the sentry is on duty, he is not carrying his weapon - instead, he has taken off the heavy gun and hung it nearby. During the period of “real” socialism, official propaganda equated guns with bravery and loyalty to communist ideology. In their works, poets and artists referred to guns as an inseparable part of Albania. One of our great poets called them “the extension of the Albanian’s collarbone.” As Slavoj Zizek wrote in his essay “The Spectre of Ideology”: "'Spectre’ is not to be confused with ‘symbolic fiction’…reality is never directly ‘itself,’ it presents itself only via its incomplete-failed symbolization, and spectral apparitions emerge in this very gap that forever separates reality from the real, and on account of which reality has the character of a (symbolic) fiction: the spectre gives body to that which escapes (the symbolically structured) reality.”  In Sentry, the artist deploys irony to emphasize the semantic contrast between the man-sentry and the gun.  The weapon is no longer a part of his body; it is not an irreplaceable means for the defense of his ideals anymore. It is the spectre of reality."

Artur Gorishti is always the protagonist of his work. He comes and goes in and out of the frame, sometimes in the role of subject, at other times in the role of creator. His background is cinematography, and his work transmits the experience of film: images are both reality and signs of passage, spontaneous response and calculated manipulation—diagrammatically prescriptive and stubbornly elusive.