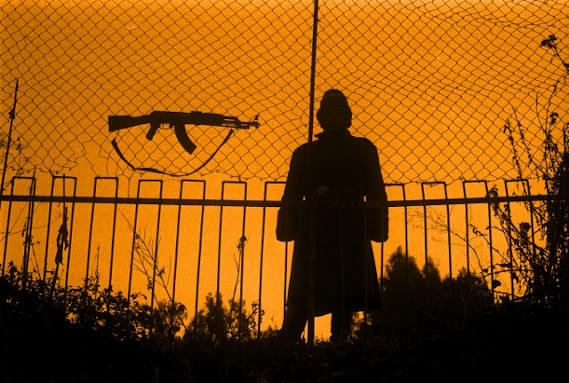 Artur Gorishti is among the group of artists who are not satisfied to work in only one media. Since graduating in theatre from the Academy of Fine Arts in Tirana, Gorishti has enjoyed an extremely successful career as a film actor. He has also been active as a photographer and painter. What has led  Gorishti to work in film as well as photography and painting? Words, images and colour are the elements of his artistic personality. In the photograph Sentry, we see the silhouette (reminiscent of Chinese shadow theatre) of a man and a gun against a background of wire mesh and fences. The figure of the man is that of a sentry whose uniform dates to the communist period. The gun is a Kalashnikov. The title of the work is Sentry, and yet the relationship between the man and the weapon makes the photograph politically inaccurate. The sentry is not carrying his weapon on his shoulder, but has hung it nearby while on duty because of its weight. During the period of “real” socialism, official propaganda equated guns with bravery and of loyalty to communist ideology. In their works, poets and artists referred to guns as an inseparable part of Albania. One of our great poets called them “the extension of the Albanian’s collarbone.” As Slavoj Zizek wrote in his essay “The Spectre of Ideology”: “’Spectre’ is not to be confused with ‘symbolic fiction’…reality is never directly ‘itself’, it presents itself only via its incomplete-failed symbolization, and spectral apparitions emerge in this very gap that forever separates reality from the real, and on account of which reality has the character of a (symbolic) fiction: the spectre gives body to that which escapes (the symbolically structured) reality.”  In Sentry, the artist deploys irony to emphasize the semantic contrast between the man-sentry and the gun.  The weapon is no longer a part of his body; it is not an irreplaceable means for the defense of his ideals anymore. It represents the spectre of reality."