Black and white snapshots taken by Artur Gorishti in the 1980s and 90s are the source material for Black Gold, a series of large-format paintings that explore the power of images and memory. Single frames are reiterated and reworked, applied to paper, wood, canvas and found elements, and overlaid with oil, acrylic and resin. The language of materials asserts itself: the painted ground is encrusted, gilded, scarred and scraped down in processes of accumulation and abrasion.

A sense of risk runs through the images. The individuals who appear as their subjects are often in danger or under tension, and the surfaces themselves are raw and intense, pushing the expressive potential of the materials used.

Gorishti’s work has been shown in solo and group exhibitions in Europe and North America, and was featured in open 2003 arte & cinema in Venice (curator: Robert C. Morgan). Born in Albania and a graduate of the Academy of Arts of Tirana (1987), Gorishti lives in Montreal, where he has shown at Galerie Luz and Galerie Pangée. In 2010, Galerie Rye (Montreal) presented a retrospective of his work, and in 2013, Zenit Art Gallery (Tirana) presented an exhibition of his works on paper. 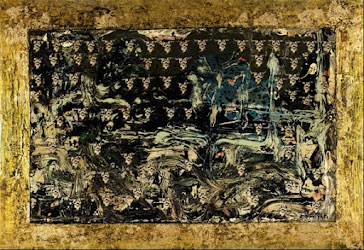